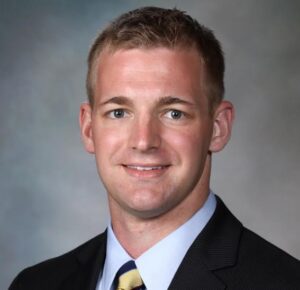 Benjamin Wilke, M.D., is an Assistant Professor and Senior Associate Consultant in the Department of Orthopedic Surgery at Mayo Clinic in Florida. Dr. Wilke specializes in orthopedic oncology and adult reconstruction and has special interests in hip and knee arthritis, bone and soft tissue tumors, and metastatic cancer.

He specializes in primary and revision hip and knee replacement procedures and enjoys utilizing the latest technology and advances in surgery, such as the anterior approach for total hip replacement and robotic surgery for partial and total knee replacements.

Dr. Wilke then received his orthopedic surgery training at the Mayo Clinic in Rochester, Minnesota, where he had the distinction of serving as Chief Resident. He then continued his training with a fellowship in Orthopedic Oncology at the University of Florida.

Dr. Wilke enjoys mentoring orthopedic residents and is actively involved in research. He has authored over fifty scientific publications and has contributed to multiple book chapters. He has presented both nationally and internationally. His research interests include opioid-sparing surgery, enhanced recovery after hip and knee replacement surgery, and desmoid tumors.